The Lazy K Ranch Heritage Preserve is more than just a name, it is a place that is home to a hard-working family who built their treasured ranch from the ground up and now has the ability to keep it intact forever. This unique conservation project created a solution which blends together a mitigation preserve for species habitat and the creation of critical vanishing vernal pools and wetlands while forever protecting the ability to continue ranching on the land and providing the opportunity to grow.

Mike and Sherry Knapp, along with their son Larry and daughter Michele, initiated this project to provide long term sustainability for their ranching operation and to maintain the threatened habitat and species on their property. The Knapps worked with John Vollmar of Vollmar Consulting, recognized for its expertise in all aspects of vernal pool assessment, construction and monitoring, to complete this project. Vollmar Consulting put the mitigation preserve agreement together among the Knapps, California Rangeland Trust (Rangeland Trust) and a developer, along with the U.S. Fish and Wildlife Service and U.S. Army Corps of Engineers.

To offset the impacts of a 31-acre development project by nearby U.C. Merced, this 93 acre easement, held by California Rangeland Trust, ensures the preservation of seasonal wetlands and vernal pools, San Joaquin kit fox habitat, and California adult tiger salamander migration and sheltering habitat. Most notably, this mitigation easement is part of the family’s larger ranch where the Knapp’s plan to enter into additional mitigation easements.

The allure of the land was more than Mike and Sherry Knapp could take back in 1963 when they bought the home ranch. They were two kids who both went to Fresno State and had their eyes set on a cow/calf operation of their own. Soon after buying the home ranch they got a permit to run their cows on the National Forest between Bass Lake and Yosemite National Park (Park). Started as a cow outfit, Lazy K Ranch soon become known for the great horses they produced. According to Mike Knapp, “Gathering cattle in the Sierras, at elevations up to 6,500 ft., takes a special kind of horse. He has to have a good mind, good legs and a big heart.”

In 1967, they bought the pack station at Fish Camp near the south entrance of Yosemite National Park to provide some needed cash flow. Along with supplying horses to the pack station they began to provide horses to nearby Christian summer camps for trail rides. Over time, this part of the business grew to the point were the Knapp’s were supplying the horses to several youth camps in central California.

Unable to find a reliable source of quality horses for the stock operation, Sherry Knapp, the matriarch of Lazy K Ranch’s horse program, purchased the ranch’s first American Quarter Horse Association (AQHA) stallion in 1975 and then searched the west coast for cow bred mares with good conformation to cross him on. Before long, word spread and friends and neighbors were asking if they could purchase horses right off the ranch. One thing lead to another and in 1982 Lazy K Ranch held its first “Pick A Colt Day Production Sale”.

Held the first Saturday in June, about 80 AQHA and American Paint Horse Association registered colts and fillies are sold on a first pick first purchase basis, with buyers coming from across the west cost. In 2008, Lazy K Ranch celebrated the 25th anniversary of “Pick A Colt Day” by putting the sale online and running it in conjunction with the live sale.

It has taken nearly fifty years to piece together the ranch with the help and support of neighbors. “It has been a true blessing to have the friends and neighbors that we do, these folks have given us a lot of opportunity and we are so thankful,” said Sherry.

No matter the size of the ranch over the years, the children were always expected to work. When son Larry was four years old he spent five days on horse back to push 200 cows and 25 head of horses from Chowchilla to Fish Camp along with his family and a few neighbors. “It was different back then, in 1970, there was much less development than today. We even pushed those cows across HWY 41,” told Larry.

Even with all the activity at the pack station and their annual horse sale the Lazy K Ranch is primarily a cattle operation. They use rotational grazing with both the cattle and the horses in a sort-of checker board fashion with horses following cattle and vice versa. This grazing pattern helps with the parasite load as the animals are susceptible to different bugs and the constant rotating breaks the life cycle of most parasites. As each are also different grazers and prefer different grasses they compliment one another and leave behind healthy pastures in their wake. Some of the pastures on the ranch have been grazed this way for over 30 years. 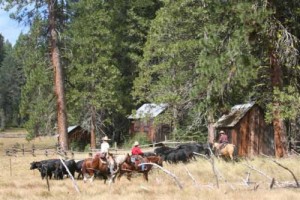 The name, Lazy K Ranch Heritage Preserve, was chosen by the family to emphasize their desire to preserve the land and the heritage that is part of the ranching operation they have built. “Our motivation was to protect our land and grow it while also being able to pass it down to our next generations. Our passion for this land runs deep and the community of friends and neighbors around us deserve much credit for helping us get to where we are,” said Mike.

The family maintains that fragmentation and parallelization are two of their biggest threats. “Chowchilla used to be far away and now it seems we are right on the edge of town. Development is reaching all our ranch borders, soon we could be completely surrounded by new homes,” said Sherry.

The Knapp family is grateful for the lifestyle the land has provided them. Mike reflected, “It is important to us to do something in our lifetime to preserve this open space. An easement was the tool to see this place stay intact and out live us all.”